Exhibition tracks the length of our largest river from Mount Ruapehu to the sea. 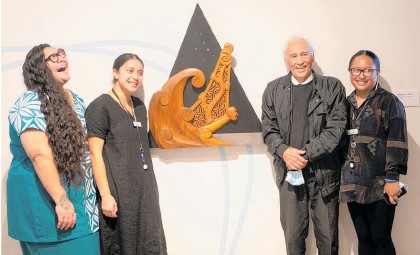 Apowerful exhibition bringing together the sculptures of world-renowned Tainui artist Fred Graham is now open at Hamilton’s Waikato Museum Te Whare Taonga O Waikato. Katohia He Wai Moou, Katohia He Wai Mooku: Waikato River has been curated by Waikato Museum’s visitor experience team. The artworks are on long-term loan from the Waikato River Authority and relate to historic sites along the Waikato awa. “We knew as soon as we saw Fred Graham’s works that we wanted to emphasise the relationship between the artworks and te awa o Waikato, which we work alongside daily,” said Kahurangiariki Smith (Tainui, Te Arawa, Mataatua, Takitimu, Horouta) who co-curated the exhibition along with Tinei Mulipola Faiaoga (Luatuanu’u, Manono Tai i Haamoa), Norma Stewart (Waikato, Ngāti Mahuta, Ngaai Tamanuhiri, Ngāti Kahungunu ki te Wairoa), and Te Mihinga Tuterangiwhiu (Ngāti Hikairo, Ngāti Māhanga). “The artworks are so striking on their own, we’re all feeling so grateful to have had the opportunity to collectively showcase these taonga.” Rich with symbolism, the exhibition tracks the length of Aotearoa New Zealand’s largest river from its beginnings at Mount Ruapehu to the powerful currents rushing past the museum, and onwards to the sea at Te Pūaha o Waikato (Port Waikato). “Having our rangatahi in the visitor experience team curate this exhibition under the guidance of experienced and respected curator Maree Mills (Ngāti Tūwharetoa) has been a wonderful opportunity for both the team and the museum itself,” said director of museum and arts Liz Cotton. “Rarely do people in visitor-facing roles get the chance to develop curatorial experience in their own museums, and this team of amazing women has made the most of it — right through to thinking about associated programmes, and how other taonga under our kaitiakitanga can support Fred Graham’s narrative about the Waikato awa. “I hope we are able to develop further opportunities across our Waikato Museum team in the future.” Born in the South Waikato town of Arapuni in 1928, Fred Graham is a Tainui kaumatua of Ngāti Korokii Kahukura descent. He is a worldrenowned carver and sculptor, and an inspiring mentor who has shared his knowledge and skills with many Aotearoa New Zealand artists. His work integrates Māori mythology and art practices with Western modernism. Alongside artists such as Ralph Hotere, Paratene Matchitt and Arnold Wilson, he is recognised as one of the primary proponents of the Contemporary Māori Art Movement which emerged in the 1960s and 70s. In 2018, he received the Arts Foundation Icon Award and was named an Officer of the New Zealand Order of Merit, for services to Māori art. As well as public sculptures displayed throughout Aotearoa New Zealand, his work has been exhibited extensively here and internationally. He continues to mentor young sculptors and artists from his Waikato home. Katohia He Wai Moou, Katohia He Wai Mooku: Waikato River works by Fred Graham is open 10am to 5pm daily and entry is free.