Tell council what you think of Three Waters 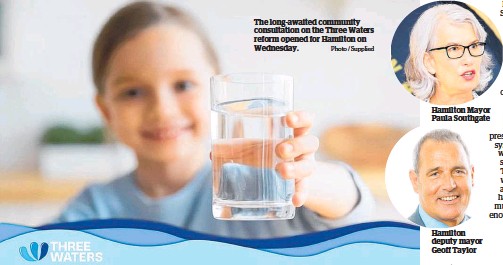 Hamilton City Council’s longawaited community consultation on the Government’s Three Waters reform started on Wednesday. However, the time for Hamiltonians to give feedback is short. People can have their say for two weeks, between June 22 and July 7, helping to shape the council’s official submission to the select committee. People have more time to give feedback to the select committee directly as its submissions period closes on July 22. Despite the short timeframes, the city council and Local Government New Zealand (LGNZ) say they are committed to making their communities’ voices heard in Government. Hamilton Mayor Paula Southgate says the council needed to hold off on community consultation until the final legislation was available to know what to consult on. “It’s frustrating that now [the legislation] is available, the consultation time given to us by Government is so short.” Southgate says the short timeframe meant that the council had to respond to government timelines very quickly. “Way too quickly than any of us are comfortable with. Frankly, the Government’s communication has been pretty poor. But this is the Government’s reform, and we have to work to their deadlines if we want our views heard.” Deputy mayor Geoff Taylor says he supports the consultation but was “really disappointed” that the council didn’t do it earlier. “If we had done it earlier, we would have had a better impact. “Our normal consultation period is a month . . . Two weeks for something this huge is pathetic. It’s an insult to ratepayers.” Southgate says the council is now pulling out all the stops to get the best result for Hamilton, including offering a chance for people to sign up to receive consultation details as soon as it’s available. “We have done everything we can to make it easier for Hamiltonians to understand this reform and be part of it.” Taylor agrees that most people would “have their heads around” the reform by now which is why the council should have trusted the community and consulted earlier. His message to Hamiltonians now is to “Keep trying, folks. “All we can do now is to follow the process and make a submission . . . [But] there is a lot more to come, so we need to do better in the future. We can’t do much worse.” Meanwhile, Local Government New Zealand (LGNZ) says they will also make a submission to the select committee. LGNZ president Stuart Crosby says: “We will be doing everything to ensure that the model and legislation are in the overall interest of our communities. “Our submission will focus on how local voices can be expressed in the new system and whether this is strong enough. This includes whether local authorities on behalf of their communities have enough connection and influence with the proposed water services entities to meet the communities’ needs.” He says the connection between councils and the community was “vital” and “cannot be lost” when the reformed system is in place. The first piece of legislation, The Water Services Entities Bill, passed its first hearing in Parliament on June 9 and is now in front of the Finance and Expenditure Committee. The Water Services Entities Bill will establish the controversial four entities, once it passes the third reading and becomes law through receiving the royal assent.