John Holyoake has officially stepped into his new role as Western Bay of Plenty District Council’s CEO. The Tamaki Regeneration Company, which John has led since 2015, formally handed John over to Western Bay of Plenty District Council in a po¯ whiri ceremony held in the council chambers on Monday. Kaumatua and leaders of iwi from Tauranga Moana and Te Arawa as well as Ruapotaka Marae in Auckland joined elected members, John’s family, friends and staff from both organisations — close to 100 people — to participate in the po¯ whiri, a welcome ceremony conducted in accordance with Ma¯ori protocols. John replaces retiring chief executive Miriam Taris, who was appointed in 2014. Most recently John was the chief executive of the Tamaki Regeneration Company — the largest urban regeneration project in New Zealand, a role he has held since 2015. Previously, John has worked for Serco NZ, Housing NZ and Department of Corrections in senior leadership roles. After speeches of welcome from kauma¯tua, and the singing of waiata, John and his wife Sara were symbolically walked over from the Tamaki side to join the Western Bay of Plenty crowd. Originally from Rotorua, John says it is great to be back in the Bay of Plenty and eager to bring his skills and learnings to the rohe (area) and the inevitable challenges the council will face, particularly with reforms like the Future of Local Government and Three Waters. “These are unprecedented times in the Bay of Plenty. This is a district abundant with opportunity and growth. “Council plays a critical role in enabling and fostering this growth and I’m excited to lead the Western Bay through this period of change. “I’m particularly looking forward to building a true partnership with iwi as they play a critical role as kaitiaki. The voice of iwi, and the community, is paramount in everything we do at council.” Western Bay Mayor Garry Webber says he and his fellow councillors are looking forward to working with John on the opportunities that the local government reforms will present in the coming months. “We also want to build on the solid platform that Miriam Taris put in place to further strengthen our relationships with mana whenua, our many communities, our business stakeholders and our neighbouring councils.” ■ 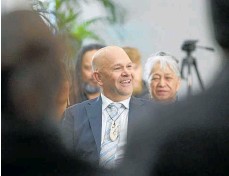