ANapier women’s group started almost 40 years ago is celebrating a long list of community achievements — all done with a hiss and a roar. The Spirit of Napier Lions Club, formerly Napier Lioness, will celebrate its anniversary next year, and although membership has dwindled, it now boasts five younger members, says president Val Forward. “We have had membership as high as 50, now we’re at 25. Like all service clubs it’s harder to attract new members.” A wide range of fundraisers over the years have included catering for funerals, meals for retirement villages, serving mid-winter Christmas dinners and organising the Spirit of Lions Young Achievers Award, which recognises Year 13 students who excel in the arts, sports and other activities. “After 10 years all colleges recognise our club and pupils are proud to include us on their CVs,” Val says. Last year the club raised and donated more than $6000 to the community. “Where would communities be without support for the needy? Last Lions year we used over 1000 hours doing community jobs.” Val says groups are happy to visit the club to accept funds and return to talk about spending them. “Last year we presented St John funds for a chairlift chair for their ambulance.” Val describes Spirit of Lions as an all women’s club. “Women looking for company, new ladies to town who want to make friends — anyone who wants the opportunity to help in the community as a group.” To help mark next year’s anniversary, a new nationwide competition “Quirky Art” will be held in May. “Entrants will be asked to select a caption of their choice with a quirky caption, for example ‘A Pod of Wales’ may caption an image of the royal family, cartoon-style, swimming in the sea in a pod-like formation.” Entries can be of either paintings, drawings, carvings, mosaics, etc. “They will be displayed in picture frames and an easel. Entrants will submit a photograph and from these 50 will be selected for showing and final judging.” The group is looking for major prizes for three categories — Supreme Design, Rising Stars-School and EIT entries. The group’s major fundraiser each year is the Napier Garden Competition which they run on behalf of the Napier City Council and have had the contract for 20 years. They have also completed a list of community donations which includes drip bags for Hawke’s Bay Hospital — an ongoing project which supplies the hospital about 300 bags a year, 40 toilet bags for Women’s Refuge, 180 knitted beanies for preschool children and knitted knee rugs — a new project keeping members busy. These will be donated to the elderly in need. “We are a small friendly group who enjoy many social outings as well as working on our projects. We welcome any contact from any new members.” ■ Napier Spirit of Lions, meetings third Tuesday at Taradale RSA, 6pm. Contact Val Forward 06 844 0439 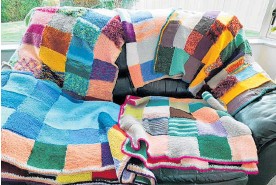