Being recognised as the top achieving art and design student at EIT is the culmination of years of hard work for Sacred Heart College teacher Sandie Howlett. Sandie, who is also head of art at Sacred Heart College, received the Gordon Harris Art and Graphics Award for a high achieving student in art or design in the bachelor of creative practices at this year’s graduation. The award came as a shock for Sandie, who instead of attending her own graduation, supported her son who graduated on the same day from the National Academy of Singing and Dramatic Art (NASDA) in Christchurch. She only found out when fellow colleague Ashton Jamieson, who received her master of professional creative practice at the same time, let her know. “She messaged me and said, ‘you’ve got this award.’” The award has allowed her to buy more materials, which has been greatly received. Sandie completed the degree during a year-long PPTA study grant last year. “Having the year off really allowed me to do my own thing and evolve my own work and then bring all that knowledge back into the classroom which is great. “It reinforced a lot of what we were already doing in terms of contemporary practice so it was nice to be affirmed that what we were doing for our students was also being taught in a tertiary setting as well.” She says it also opened her eyes to the contemporary world of art and other ways of doing things. Sandie’s latest tertiary stint came exactly 30 years after she first completed her bachelor of education and teaching diploma. She originally trained to be a primary teacher but ended up in a rural secondary school teaching art more than two decades ago. “That was one of the reasons for going back and doing a bachelor of creative practices because even though I had taught it for 27 years, I didn’t have a formal qualification in art, but I just sort of learnt on the way and I did art as a student myself.” She is thankful for those who assisted in her journey back to study, and hopes to be able to complete her masters at some stage. “I’m really grateful that the school allowed me to take a year off to do that. It’s something that I’m going to treasure because it wasn’t something a couple of years ago I even thought was possible to be able to do and things just sort of fell into place and happened.” Principal Maria Neville-Foster says they are very proud of Sandie’s achievements and are pleased to have someone with her talent guiding and teaching their students. 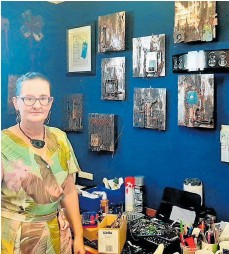