Inspiration for next wave

A gold medal-winning Hawke’s Bay surf life saver hopes his crew’s heroic victory at nationals can act as inspiration for the next generation of competitors. Despite an 11th place finish overall at the 2021 BP Surf Rescue New Zealand Championships, Westshore SLS Club picked up their first gold medal in the Open Men’s Single Rescue Race. Crewmen Taylor Dick and Taine Williams dragged their vessel into the water before picking up patient Greta Augustine 100 metres from shore, setting up a sprint finish down the beach to the finish line. Dick said single rescue races often finished with a close call, but was happy to cross the line first and pick up his first men’s gold medal in the event. “I hadn’t won that race since I was in the under-21s, so it was great to win in the men’s category,” he said. Westshore SLS Club also finished with two further fifth placings in the Mass Rescue and Tube Rescue, as well as a silver medal in the Open Men’s Teams Race. Despite adverse conditions in Ruaka¯ka¯ this month, Waimarama SLS Club’s Open Men’s crew of Keegan Merwood, Luke Davis and Ella Sherratt picked up the bronze in a tight Assembly Rescue Race. Brothers Tom and George Charteris secured silver in the men’s under-23 division Mass Rescue along with “patients” Meg Russell and Lexie Cunningham, as well as placing fifth in the Assembly Rescue. Waimarama’s other Open Men’s team of Ben Morgan, Ollie Wood, Tayla Hook and Tia List also took home bronze in the Mass Rescue Race, along with a fourth place finish in the Open Men’s Single Rescue Race. Waimarama SLS Club placed ninth overall. Club team leader John Sanko said the entire competition displayed an “absolutely outstanding effort” by both Hawke’s Bay clubs. Dick said he hoped the medal haul, including his gold, will help inspire kids and adults alike to take SLS. “Surf life saving is great for kids to get into early on,” he said. “You get to learn surf skills, but also if you carry on as a lifeguard there’s a tonne of courses in first aid and everything. “Plus you get to compete in the sport, which is a big plus.” 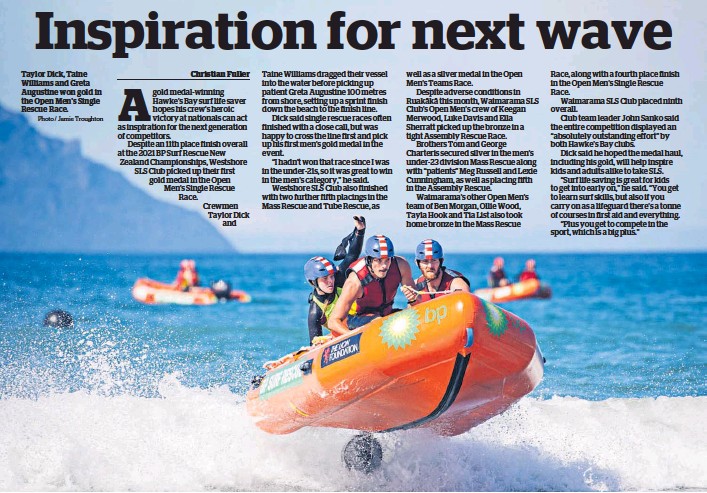