DRINKING IN THE DAZZLING panorama and elemental glory, adjacent to the strikingly weathered Petone Wharf, history was on my mind. I reflected on how it was on this sandy beach that our first planned European settlers came ashore in January 1840, spilling off the New Zealand Company’s Aurora. I ventured inside the adjoining Petone Settlers Museum, a gorgeous little repository of nation-building history, ensconced within the creamy-hued grace of Petone’s former bathing pavilion. A replica of the prow of Aurora juts out from the exterior. Today, the building does a sterling job in collecting, caring for and sharing Petone’s social history. What really struck me was the museum’s outstanding showcase of the multitude of factories that took shape in Petone, from car assembly plants, woollen mills and meat works to tobacco, toothpaste and soap factories — and the convulsive effect of their systematic closures in subsequent decade. A recent eye-catching addition, coinciding with last year’s 145th anniversary of local Petone company Hills Hats, is the “Hatmosphere” exhibition. Its client base is staggering, including the police, Defence Force, the All Blacks, Fat Freddy’s Drop and Ladi6. Check out their store, just off Jackson St. The beating heart of Petone village is on a roll with an unmistakably infectious spirit, spilling out of the largely low-rise heritage buildings that flank both sides of the street. Roaming Jackson St is like delving into a sweeping and eclectic emporium of art, eats, creativity and home comforts. You’ll be awed by the trove of independent stores touting high-end fashion, vintage gems, antiques and home wares. But the Jackson St Heritage Precinct is not just a tractor beam for shopaholics but foodies too, because the street boasts a gobsmacking array of 72 eateries! Aside from the long sprawl of Ponsonby Rd, no other street in New Zealand serves up quite as many eats as Jackson St. Accentuating its allure is the fact that the banquet of offerings is more tightly bound, sandwiched within an 800 metreslong TRAVEL stretch. Ponsonby Rd, by comparison, is twice as long. Catering to all budgets and tastes, it is like the world on a platter. It’s not only eateries with an international focus. Petone’s melting pot of cultures is served by a specialist range of stores. A star specimen is On Trays, a deli-styled shop stocking and serving a tantalising range of international goodies, headlined by its specialist range of South African products. Hello biltong! Mrs Ball’s Chutney, Rooibos Tea and Ouma Rusks are all big-sellers. On Trays has been a Petone mainstay for more than 20 years, with local legends Steven and Valda Scheckter at the helm. You’ll love trawling their shelves, drooling over the food exotica like pashmak (fairy floss) and rahat from Iran, and the finest Iranian saffron. There’s pomegranate molasses, rose and orange water from Lebanon and dulce de leche from Argentina. On Trays claims to stock the widest range of local and imported cheeses in New Zealand. An essential experience is to order up some goodies from Scheckter’s Deli, where the star of the show is the Reuben, a grand assembly of New York pastrami, sauerkraut, swiss cheese, piccalilli, duck fat spread, toasted sourdough caraway rye and a sour pickle. It was the best sandwich of my life. Window-browsing in Jackson St is a formidable battle of the wills, with enticements aplenty testing your selfcontrol. The Chocolate Story is hard to pass by, where fine chocolates and macarons are made by hand, using French- and European-inspired recipes. Another destination store is The Dutch Shop for the best biscotti. It’s sold alongside a spoil of delights like salty liquorice, crunchy speculaas (spiced Dutch biscuits) and gouda with nettle, cumin and pepper. An ebullient venue that personifies the spirit of the street is Queen of Jackson, a quirky craft beer bar and eatery with an East London design aesthetic. Sidle into one of the large, comfortable booths or long leaners and soak up the sociable vibe, while snacking on the sharing plates or downing a dessert cocktail. Heritage nuggets abound along Jackson St, from the clocktower and Lighthouse Cinema to the Old Police Station & Jail Museum. As a heritage-listed precinct, the colour palette of buildings is heavily restricted. Then there’s the wonderful spring water fountain, Te Puna Wai Ora. Like Jackson St itself — it tastes so good! 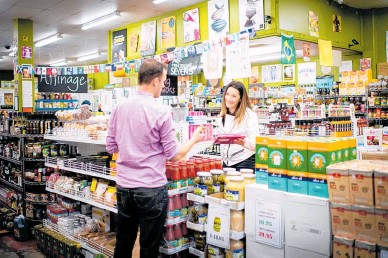