It took the best part of a lifetime for a local lad to return from overseas to the district of his birth. Garry Stevenson was raised in Te Puna where he studied and qualified to become a mechanical engineer. After gaining the necessary experience he departed the country to apply his skills in other parts of the world, and finally applied to join the crew of an oil rig in the North Sea. After several years as an engineer Garry decided to come ashore and settle into something less hazardous. His leave time was spent in Scotland and, as he was familiar with the country, he purchased a pub in a small village. It was during this time he sought out and became a Freemason in the local lodge, progressing through his degrees. He never forgot his roots and returned to New Zealand to join the crew of a fishing boat targeting tuna, and then moved back to the district to buy and operate a kiwifruit orchard. This gave him the opportunity to again take up active membership of a Freemasons Lodge so he joined Lodge Katikati in 2014. For the last six years he progressed through the officers chairs to qualify as a lodge master. Unfortunately Covid-19 resulted in him having to wait a further year, but he finally was installed as the Worshipful Master in June by the District Grand Master, Glenn Harris, at a ceremony held in the Katikati Lodge rooms and attended by a 60 brethren from the Bay of Plenty district. The installation supper was held in the Katikati Catholic Church Hall and included ladies of the visitors and members. Garry will be governing his lodge with the assistance of his wardens, Trevor Gilbert and Vic Holloway. He has ensured that the programme will be a busy one, with a 60-year service badge presentation in July along with a social evening for wives and partners. New membership will fill the programme into next year with a full range of degrees to be worked. When asked of his aims, Garry said, “It is imperative that the lodge takes steps to ensure that people understand more about us. We have not really communicated how we operate and what we stand for. “Time needs to be spent showing how charitable we are, and not a secretive group some would have you believe. It is, however, wonderful to see men applying for membership and becoming part of a worldwide organisation.” At his first committee meeting the new master supported the establishment of a new charitable project aimed at supporting a young apprentice in a trade with details to be published in the coming months. 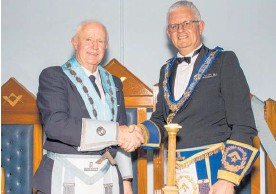