A2.5-hectare site that has been in the same family for generations is being sold for the first time in 50 years. Baker Timber Supplies Limited and Glenville Properties Katikati Limited are placing the property at 27-31 Waterford Rd and 4b Major St on the market as a combined block including a Katikati timber processing/treatment plant and former sawmill. The main site operates as a timber processing and treatment plant owned by Baker Timber Supplies Limited. Also for sale is the adjoining twobedroom house on a cross lease title of 1011 sq m and another threebedroom house on 1012 sq m of land. The third site is bare land of 1899 sq m. Tom Rodewald was appointed as director of Baker Timber Supplies Limited in May 2020 to help shareholders maximise the business and property’s value with the intention to sell. The business started in 1934 but Rodewald said the shareholders and staff were now reaching retirement age and had decided to sell. “With some sadness, they feel it is time to move on.” The sale includes the land and its buildings with the option to buy the business and its assets. The property has been in the Baker family for about 60 years and officially went on to the market this month. Rodewald said they had been approached by “a number of” interested parties before advertising the sale. “Since the property has been advertised for sale inquiries have been received throughout the North Island from developers and parties that are interested in operating from the site on a commercial basis.” While he said the current market would determine the sale price, the site had huge potential. “There is little industrial land available in the Bay of Plenty so we are expecting a large interest from developers or anyone looking for a large block of land for a commercial operation.” Rodewald said the mill no longer operated but the timber processing and manufacturing operations and treatment plant had continued and three staff remained onsite. “Over 60 years it is believed over 100 staff have been employed with at least 30 onsite during the company’s peak operations.” At its peak, Baker Timber Supplies manufactured more than one million kiwifruit packing trays a year and supplied thousands of poles for kiwifruit orchards across the region. The Baker family put the timber processing plant and sawmill on the market in 2011 but Rodewald said the property did not sell. Property Brokers Waikato/Bay of Plenty commercial manager Alan Copeman said the properties were in eight titles. “It has been a family business for a very long time, so it is kind of like an end of an era.” The property is being sold by tender and in one parcel or as individual lots. There are several other tenants with short-term lease arrangements in place generating a holding income of about $4668.03 (incl GST) per month. Copeman said the successful tender would have the first option to buy the existing business and enter into negotiations with the director. As a result of the historical uses of the site, some site contamination exists and the property will be sold with the appropriate consents, he said. “There is potential for the land to be developed into industrial or commercial property.” The property is for sale by tender, which closes 4pm on August 5. 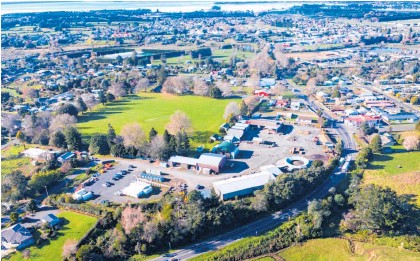