Last week Miriam Taris left behind the high-powered public-sector role she has relished for the past seven years and steps into an unknown future. The Western Bay of Plenty District Council chief executive was formally farewelled last Monday for her leadership and work over the years. Her successor John Holyoake was welcomed at a po¯whiri on Monday. From a bustling, warm cafe in downtown Tauranga, Taris says she is at peace with her departure and tells Bay of Plenty Times Weekend she could have signed up for another five years in the role “but it’s time for me to take on a new challenge and leave the council in a good space, on good terms”. Under Taris’s leadership, the council has quietly won several local government awards, made a historic decision to return part of Matakana Island to Ma¯ori, steered the region through the fallout of PSA, and even battled with the Global Financial Crisis (GFC). Much has been without the fanfare one could expect from some councils but Taris says the under-promise, over-deliver ethos is key to the organisation’s culture. “We do that consciously. I like to think we’re strong at performing under the radar,” she says. The former auditor takes a slow sip of her coffee and says she has nothing lined up for the next journey in her career. Having “worked hard and been busy” for most of her life, she is looking forward to the break. “I haven’t got a secret plan or anything like that. It’s really quite nice.” Taris began at the council in 2008, spending six years as its manager of corporate and planning services before replacing former chief executive Glenn Snelgrove in 2014. Before the council, Taris was a manager then director with Audit New Zealand from 1999 to 2008 and also held senior roles with KPMG. “Most people go the other way (from the public sector to private). But now it’s a profession where people choose to be in the public sector because they want to make a difference in the community,” she says. “I like to think I’ve helped to keep that going. People tell me they love working at Western Bay. It’s about the people. We’re family-friendly, dogfriendly. We’re pretty relaxed but that doesn’t mean that we are not professional.” In addition to the chief executive role, Taris has been instrumental in the establishment of the proposed Government Three Waters Reform as a member of its steering committee. Asked if she is considering a role helping lead the reform — or proposed new entities that will oversee the management of some of New Zealand’s water supply and infrastructure — she says she has not made any plans. “I’m having a complete break for at least two to three months, then I’m going to look at it [what’s next]. I have had people approach me.” As chief executive of a council overseeing roughly 54,000 ratepayers, Taris says it hasn’t always been easy in a role so highly scrutinised. “I swear, the day I started, the GFC started. I came in and had to deal with it. Everyone was in a boom mode. Then it stopped overnight. Everything stopped. Over a number of years, council was in this trajectory where we invested in lots of things so we had to manage finances and debt around that. “Then PSA came. Eighty per cent of New Zealand’s kiwifruit grows in our area. There were lots of kiwifruit orchards affected. At the time, we thought that could be the end of the industry.” She shakes her head slightly to think of how different the problems from the past are compared with the council’s existing challenges of housing and infrastructure. “Now we have growth problems.” Taris says an influx of people, especially families from Auckland, has placed significant pressure on the council. “The families come out of a city but they still want that level of service. The challenge for Western Bay is people want more, not less.” Taris estimates she has spent several thousand hours in council and community meetings during her tenure, and despite all of the hours, scrutiny and challenges over the years she has no regrets. “I’ve always had the mantra not to take things personally. I think a lot of people would find that role difficult to deal with. My sister says ‘I don’t know how you deal with that’. I don’t think it’s a role for everybody.” But she has loved it, and part of her motivation has been trying to be a good role model for others, particularly women. She says the positive culture at Western Bay was part of the reason she took the job in the first place. Whatever Taris’s new path becomes, it’s unlikely to veer far from civic issues. “I think there’s going to be a lot of change to local government in the next five years. We don’t know what that could mean — it’s destabilising, or it’s an opportunity,” she says. “I’m looking at it as an opportunity.” 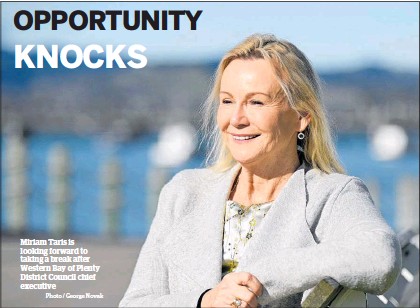