Have you seen the amazing 5-metre-high, 20m-long mural painted on the side of the Novus Glass building in Oxford St? The star of the artwork is local cat Niko, a rescue who now lives on a feijoa orchard just out of town, and the perspective of the Tararua Ranges is from directly above his home near Potts Rd. Horowhenua District Council has commissioned Palmerston Northbased artist SwiftMantis to create the masterpiece. Funding for the mural comes under council’s recently adopted Community and Social Development Action plan. This plan looks for opportunities to beautify and add vibrancy to spaces, creating a colourful community, according to Cathryn Pollock, HDC’s acting community, wellbeing and engagement manager. “[Council] believe the addition of this mural to our community adds to the vibrancy that we’re setting out to achieve and we’re hoping that this is just the start of many feature murals in our district,” said Pollock. Murals and street art are actually SwiftMantis’ second profession, which he began in 2016. “I’m primarily a tattoo artist ... have been tattooing for just over a dozen years and now run my own private studio, In The Shade,” he said. SwiftMantis’ street artwork predominantly focuses on animal realism and in the last few years he has moved towards animal portraiture and storytelling. The stray animals stories series began with a portrait he did of his own stray cat, Squishee, for Street Prints Papaioea in Palmerston North last year. “I then painted a portrait of Kevin the school cat at Parkland School [also in Palmerston North] followed by Hangar the airport cat in Whanganui,” he said. SwiftMantis met these cats and photographed them himself to fit the largescale mural perspective, which means he basically got right down on the ground to shoot them at an upward angle to match how a person would be viewing the mural on the wall. The mural work in Levin started with wall preparation which involved sealing the 100m2 surface area with 17 litres of sealant as they were raw concrete panels to begin with. “My work on this project has been a bit off and on due to bad weather and having to finish early because of the shorter winter days.” Plus he became unwell trying to paint through the cold snap that hit recently. SwiftMantis finished the mural last week. To see more of his amazing work check out his Facebook page https://www.facebook.com/ SWIFTMANTISProductions. With the Horowhenua Creative Communities scheme opening for applications on August 1, people are encouraged to apply for creative projects they want to pursue. If it’s a mural, they need to seek permission from the owner of the identified space before applying. More information about this scheme can be found on the council website https://www. horowhenua.govt.nz/Home. 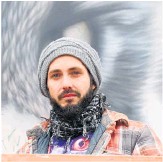 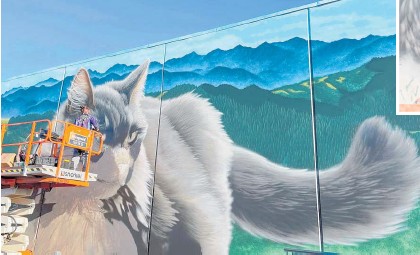