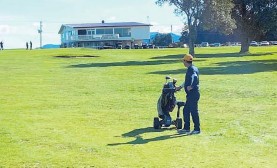 Waihi golfers will be pleased to see the end of July and will hope August can come up with at least some dryer weather. The wet July has made conditions difficult, and it is not surprising when we consider the fact that over 525mm of rain was recorded at the course for the month. A very wet Monday once again washed out the Vets’ weekly competition, but the weather cleared on Tuesday morning to allow the nine hole section to go ahead with their haggles. With 140mm having fallen on the course on Monday it was heavy going for the nine hole Wintle cup field, and with only two ladies in division one, Lorraine Meyer with 39 nett, bettered Mandy Piper with 44. In division two, Jenni Mora had the top score with 38, followed by Margaret Hickey, 39, and Julia Nicolson, 40. Only two men contested the Martha-nett, with Rex Smith, 39, prevailing over Garth Pritchard, 44. WEDNESDAY LADIES Eighteen ladies ventured out on Wednesday onto an extremely saturated and very windy course for a stableford haggle. There were no electric carts permitted on the course, and a long time lady life member could not recall seeing more water on the course, and in places she had never seen it before. Unsurprisingly the scoring wasn’t great, but Raewyn Wright handled it best with 30 points, followed by Kaylene Croker, Sarah Tomsett, and Nita Dalley, all with 29. The Dreamers Player of the Week was Karen May with 74 nett. The monthly Hume Meatpack Tournament was held on Thursday, and with the course still saturated, electric carts were still not permitted which did reduce the field a bit. In the end 43 players entered the competition, although only 39 completed their rounds. The winner of the gross was Club President Daryll Denyer with 79 strokes, while the nett winner was Mark Thomsett with a nett 72. The top stableford was won by Francis Gascoigne with 35 points on a countback. The other top scores were in division one, David P. Campbell, and Ken Mustard, both with 35 points, followed by Wayne Brierly, and Richard Taitoko both with 34. In division two, John Drent continued his recent good form with 34 points, along with David Ashton who also had 34. They were followed by Mark Mora, 33, and Keith Gerrand, Nicola Warren (Martinborough), and Peter Wright all with 32 points. There were no twos scored on the day. SATURDAY LADIES A cheery band of 10 ladies played a net haggle on a much more pleasant day than the rest of the week. The leading light was Desley Rosevear, on a countback from Bev Ireland, both with nett 74s, followed by Jackie Robson with 75. Denise Donald, and Shoneen Dunning both had 76 nett. SATURDAY MEN On a drying course, and pleasant weather conditions, electric carts were allowed back on the course, although care was taken to avoid some areas which were still very wet. A good turnout of players enjoyed the better conditions, and in the morning haggle division one, Peter Wright topped the division with 36 points, ahead of Earl Hoskins, and Allen Smith who both had 35, followed by lucky Jim Powell with 34 points, from Daryll Denyer, 33. In division two, Graham O’dwyer had the best round of the morning with 38 points, well clear of Peter Hewitt (again) with 34, then back to five others on 32. A clear winner in the afternoon haggle was Vaughn Meads with a fine 40 points, and then back to two regular leaders, Mark Tomsett, and Graeme Parkinson with 36 points. Next was John Burns with 35, then Alex Teesdale, David Campbell, and Malcolm Coldicutt, all with 34 points. —