Lessons from threat to school 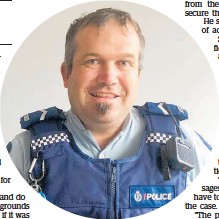 Knowing that Thames High was among four schools nationwide to be telephoned with a bomb threat gave principal Michael Hart the reassuring idea that “it’s not personal”. Police cybercrime teams are working with local investigators on hoax bomb threats made by telephone to five schools on Tuesday last week and 18 in total as of Thursday. They believed the calls were computer-generated, the NZ Herald reports. Thames Acting Sergeant Gareth Carter said locally the bomb threat had provided lessons for any potential future events, including the need for sniffer dogs to be available. On Tuesday, a staff member answered a telephone call and reported it to principal Michael Hart. “By the time I got to the phone, the call ended. It sounded like an electronic voice, and the number was an international call,” said Hart. Police were immediately called and arrived within six minutes, advising the school to go into lockdown. “They came prepared for business,” said Hart. “Police wanted to secure and do surveillance outside on the grounds so if there was a threat, even if it was a low chance, they’d secured the external area before exiting people from the buildings so they could secure the inside.” He said he believed this course of action “made good sense”. Students were taken to the field, away from buildings and the street. They remained there for almost 20 minutes before moving to the Jack Mclean Recreation Centre which had been cleared as safe. By this time the messages to parents were beginning to be sent by students from their personal phones as well as via the school’s communication tools. “Many children sent messages to their parents saying ‘we have to come home’ which wasn’t the case. “The police weren’t interested in there being a mass exodus.” Hart said he was impressed with how staff and students coped. He praised Thames police for their management. “Our staff and senior students helped the junior students, but the junior students were great as well. Staff were calm and collected. “An outsider without keys would’ve found it very hard to get in the buildings and go into the classrooms, people did a great job. “I really appreciate the way people responded to an unusual and potentially distressing situation. He said students had returned with no obvious distress. “I think they know it’s something that wasn’t directed at Thames High School. “It’s not personal. “On the field I was saying to people ‘My understanding is this is happening to a number of schools right now, it’s not actually about us’. “That was meant to be reassuring, and many of us talking about it knew it was part of a bigger thing going on.”