Probus Club of Hauraki Plains recently celebrated its 20th anniversary in June. Around 130 members and invited guests were present, including some original founding members, ambassador Sidney Shepherd and his wife and representatives from Paeroa and Thames Probus Clubs and Thames Rotary. Sidney presented president Helen Baker with a 20th anniversary certificate on behalf of parent group Probus South Pacific. President Helen thanked Sidney and also the committee for all the behind-the-scenes work in organising the day which was “hugely successful”. The celebration involved entertainment Hauraki Plains College choir, a spot raffle and a guess-thecelebrity talk by David Baker which was won by Noel Fox. Secretary Jill Mcintosh gave a talk on the history of the club and there were a number of short congratulatory speeches. The day finished with a two-course luncheon. Members were able to view photo albums and a board of photos from the past and catch up with old friends. 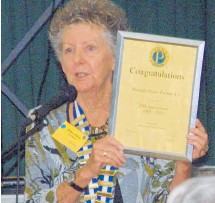