Aubyn Live Theatre has put together a production recognising musical theatre over the years with songs from popular musical shows and films. This show celebrates the emergence of theatre from the latest lockdown and is aimed at bringing our local community back into the theatre. Titled Back on Stage, the show includes numbers from The Sound of Music, My Fair Lady, The Lion King, Frozen, Wicked, Hercules, Annie Get Your Gun, Chitty Chitty Bang Bang, The Muppet Movie, Joseph and the Amazing Technicolor Dreamcoat, Jesus Christ Superstar, Fiddler on the Roof, Newsies, The Greatest Showman, The Prom, Anastasia, Waitress, and Rent, all which have wide appeal. Well-known songs will encourage the audience to “sing along to”, and the introduction of more contemporary numbers, sure to be favourites in the future. There will be a range of soloists, duets and chorus numbers with performers of varying ages and with Aubyn Live being a family theatre, it is especially pleased to feature three generations from one of their show families. The cast includes singers and dancers from many decades of performance, not only from Aubyn Live, but from the Hastings Operatic Society as they were formally known. The cast also includes new artists who have not appeared on the Aubyn Live stage before. Back on Stage offers a chance for the community to extend its support for the theatre and enable the Aubyn Live committee to build funds to keep producing family entertainment. Tickets can be booked at Eventfinda for a “toe-tapping night” of local theatre. 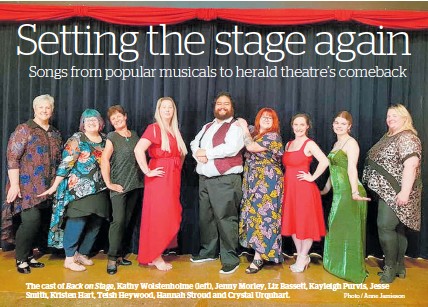