When Colin Palmer takes his last stroke in the water, he’ll leave a legacy and a conviction that it is the people we do things with, rather than the things themselves, that makes life enjoyable. Colin, 91, is a stalwart of the Flaxmere Pool, but Covid restrictions and injuries have started to dim his enthusiasm for getting into the water after almost nine decades of competing and 140 different medals, some as late in life as 2016. For a man later in life, Colin has an extensive list of hobbies — swimming, canoe paddling, violin playing, basketball and golfing are just some of his many pursuits. But it’s been swimming above all since Thomas B. Jackson, a headmaster of Raureka School, selected a 14-year-old Colin to compete in an inter-school swimming competition. “It was my first go at racing and I hadn’t had any proper training. That was my first experience of competitive swimming and I really enjoyed it,” he said. The second name mentioned is that of the Murdoch family, specifically mum Eva Murdoch who approached Colin at Madison Baths with an offer to teach him how to swim properly, which he gratefully accepted. “Eva’s son, Bevan Murdoch, then became my friend and my main target in the pool. I was 17 before I won my first Hawke’s Bay breaststroke title in 1947 when Bevan got disqualified for a false stroke,” Colin said. Colin’s largest claim to swimming fame came six years later, in 1953, when he came third in the 100-metre butterfly race at the New Zealand Championships in Invercargill. “I was also a finalist for several years in the 220 yards (200 metres) breaststroke in my 20s. My first local record was 3 minutes 19 seconds, which I whittled down to 3 minutes 5 seconds,” he said. Breaststroke still remains his stroke of choice, a stroke he managed to break a national age-group record in aged 85. “About five years ago I broke the 100-metre breaststroke record at the North Island championships in Levin, with a time of 2 minutes 40-something,” he said. When asked how he felt after setting the record, Colin said: “I was just pleased to still be able to do it”. Prior to the level 4 nationwide lockdown, Colin was still practising the stroke at the Flaxmere Pools most mornings with fellow lane mate Calvin Appleby. “I’ve been swimming to keep fit and alive since and also for the enjoyment of the sport. “However, Covid has interrupted my swimming routine, along with my own health complications, so my enthusiasm to get back in the pool has dwindled,” he said. For Colin, building enthusiasm stems from sharing experiences with people whose company he enjoys, and he’s hoping his friend Calvin’s health is up to more laps of the pool soon to reboot his enthusiasm. Colin is also aware of his own body’s limits after a slip on a loose flagstone resulted in a broken knee cap, two skinned knees, a broken wrist, and several torn shoulder ligaments. “The accident ruined my front crawl and I haven’t been able to race since I slipped. It knocked me back but I’m looking forward to getting back into it again,” he said. When not in the pool, Colin keeps himself busy practising the violin and writing a fortnightly newsletter for the Orphans Club in Hastings. “Lou Vernon invited me to join the Orphans Club 52 years ago after my first wife died. He invited me as a way to keep me going after she passed, as I was on my own with four kids,” he said. It has been the serendipity of certain people reaching out to him at important moments in his life, which has seen him living a colourful life well into his nineties. “People are my enthusiasm, who encourage me to keep on keeping on,” he said. Colin is a founding member of the Waima¯ rama Surf Lifesaving Club and Flaxmere Golf Club and a life member of the Heretaunga Swimming Club and Orphans Club in Hastings. 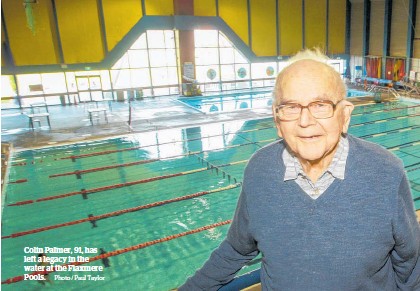