Amid a sea of football fans dressed in red and white at a Hawke’s Bay pub, they were the only pair in blue, waving a handmade Italian flag. And after riding the ups and downs of 120 minutes (plus) of drama, Paolo Pancotti and his 12-year-old daughter Tula found themselves the only ones celebrating at the Westshore Beach Inn. The Italians won an agonising Euro 2020 final penalty shootout over England 3-2 after scores were locked at 1-1 after 90 minutes and then again at the end of extra time. While it was initially a bit intimidating being the only two Italian supporters, with Paolo “hiding in the corner”, everyone was friendly as the reality of 55 years without a major trophy continued for England. “It was great to share the handbiting game with my daughter. It was her first final today and what a happy ending,” Paolo said. “I just got off the phone from my brother in Italy and I’m feeling amazing. There’s one sport in Italy — football.” He said the result was a “bit unexpected” after such a “tight” game. “It could have gone either way. “My personal feeling is that Italy could have played better.” He felt a bit sorry for England’s fans, adding that it’s “just a game”. The father and daughter were off from the pub to celebrate the win with chocolate, as had been promised. 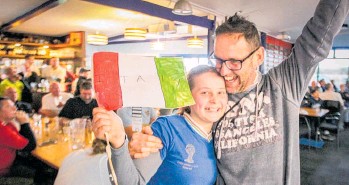