Songwriter Reb Fountain has just been awarded the prestigious 2021 Taite Music Prize for her 2020 self-titled album, which was launched with a sell-out tour last year. Named after the late Dylan Taite, one of Aotearoa’s most respected music journalists, the Taite Music Prize recognises outstanding creativity for an album. Judging panel member Sarah Illingworth commented that “Reb Fountain sees its eponymous creator at the top of her game — or perhaps preparing to climb to new and headier peaks. The album and Reb’s path to releasing it captures the independent spirit championed by the Taite Music Prize while sparkling with the high calibre of production and performance that makes an artist a star.” This month Reb features in the Small Hall Sessions tour, music promoter Jamie McPhail’s mission to bring live music to small community halls around Hawke’s Bay. Last month’s inaugural Small Hall Sessions, featuring Delaney Davidson and Barry Saunders, was a hit around the region, with some halls close to selling out. The first session was in CHB’s Pukehou Church. “Pukehou was just as beautiful and emotional for me as I had imagined it would be,” Jamie said. “What is particularly exciting for me is seeing so many new faces . . . it’s about 30 per cent my regular Sitting Room Sessions people, meaning we are doing what I really hoped, bringing the musicians that I know and love to a whole new bunch of people.” Fountain will present songs off her award-winning album. “Every time I perform I get to inhabit these tunes in a new way and I feel great reverence for them as creatures in their own right,” she says. “Right now I’d say my favourite song off the record is Lighthouse, because it’s about connection and remembering to reach out when you need it the most. We’ve all been struggling to process the enormous changes in our lives and it’s vital we continue to care about our mental health and wellbeing whilst managing the logistics of this pandemic. I hope this song provides some light to folks who need it . . . I know I do.” Jamie is ironing out a few smallhall glitches. “Just so that you are warned, your printed ticket only says that the start time is 6.30, that is actually the time that doors open, the show begins at 7.30. But this is all about community and gathering folk together, so I thought it would be a nice feeling each evening for you to feel a part of that, meet friends and strangers, enjoy some fabulous Brave Beers, Te Awanga Estate wines, Paynters ciders and complimentary platters of nibbles. “The second one . . . is that I hadn’t really considered the matter of keeping the beverages chilled. We are working on solutions to this . . .” 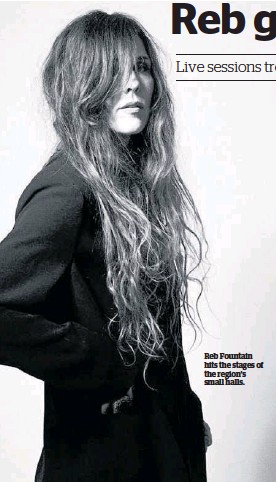