Dance teacher has all the right moves

Karamu High School’s experienced new dance teacher is hoping to inspire students through the art form. Seidah Tuaoi moved to Hawke’s Bay from Auckland at the beginning of the year to take up the role at the Hastings school. Karamu High offers dance as a subject, which is assessed internally and externally through an exam, teaching a range of styles and cultural dance. Tuaoi has a Bachelor of Dance Studies (Honours) from the University of Auckland and a diploma in teaching. She previously taught at four Auckland schools, and is an accomplished performer in both dance and singing. Tuaoi has been a full-time professional dancer at times and is currently part of an allstyle dance group called Projekt Team, and an allfemale krump group called Lighthouse Fam, as well as international group R.U.R Alliance, led by Step Up actress and dancer Jaja Vankova. Her specialty is hip-hop and street dance, but acknowledging her culture – she is of Cook Island-Samoan descent – and that of others through dance is also of importance to her. Most students are already involved with a dance crew outside of school and have some dance knowledge, she says. “It’s really cool that the students already have knowledge of their own dance styles and so what they bring is also important within the lesson because we try to find ways that they can teach others and show their skills as well.” She believes the subject does much more than teach students how to dance. “Obviously it’s fun, but more than that it gives students a sense of belonging and also pushes them outside of their comfort zone.” Tuaoi hopes to increase the number of students involved in dance, by showcasing it to those who would not normally get involved. “It’s about finding different ways to engage with other students.” At an extra-curricular level, this year they plan to take part in the Hawke’s Bay Polynesian festival in August, and the DanceNZ made Interschool competition, as well as their school production. In addition to dance, she is also teaching Year 9 health and level 1 life skills, and outside the classroom, is part of the school’s Pasifika liaison. 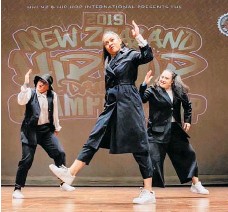